The final weekend of November saw the celebration of Winchester Discovery Centre's 10th anniversary. A weekend bursting with activity and an opportunity to reflect on the 10 years since Winchester Library was refurbished and reopened to huge success. 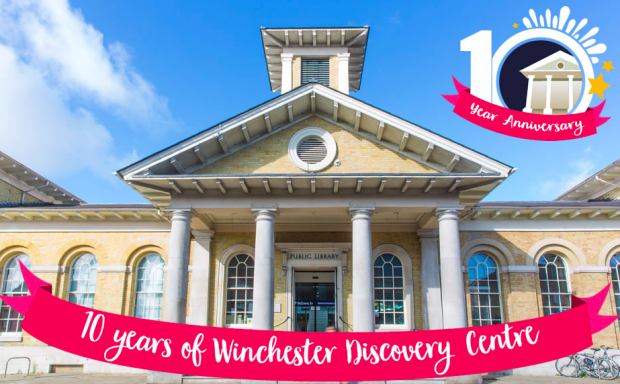 On Tuesday 27 November 2007, Winchester Discovery Centre opened its doors for the first time. Five million visitors, three million book loans and thousands of events, workshops and exhibitions later, the Centre is a library reinvented and so much more besides.

The anniversary weekend began with a variety open day, showcasing some of the best attractions that the building offers. From book groups to dance troupes, the Winchester Discovery Centre has been at the heart of the local community, and we were proud to be part of a day packed with fun and fascination.

The Discovery Centre likes nothing more than to support community projects, and we welcomed some of the friends and organisations that we have worked with over the years, including:

The event also featured a raffle with brilliant prizes from local business and partners.

The Centre is also a shining example of Hampshire Libraries’ aim of developing new skills. The Hampshire Discovery Centres, libraries and Makery spaces, and our various Code Clubs, employ an educational approach, with digital STEM (Science, Technology, Engineering and Maths) focused learning taking place in a fun and relaxed environment. This year’s anniversary is the perfect opportunity to celebrate the progression and diversification of the service in recent times.

On Monday 27 November, we welcomed individuals and organisations instrumental in the Centre's development back for an official ceremony. It was a fantastic opportunity to acknowledge the huge success of the building since its refurbishment, both an overview of the 10 years and the role of the building moving forward.

The arriving delegates in the Performance Hall were greeted by the Friends of Winchester Chamber Orchestra’s beautiful classical melodies, while a range of partners and events organisers were on display around the room. The guests were then offered guided tours of the building, providing a sense of all the diverse features the building offers.

Back in the main hall, the Head of Libraries and Registration Services, Sara Teers, opened the ceremony, introducing Hampshire County Councillor Andrew Gibson. His speech congratulated the building on all its successes:

“Winchester Discovery Centre was one of our first libraries where we blended strong library traditions with modern facilities such as a performance hall, art gallery and cafe to transform it into a real community hub.
“A key part of this success is down to the award-winning redesign by our in-house Property Services team, establishing the Discovery Centre as a versatile space and flagship venue. The popularity of the Discovery Centre is far greater than we’d dared to imagine – welcoming visitors of all ages for reading, learning, family activities and cultural events.
“My thanks go to all of our visitors, dedicated staff and volunteers who have contributed to its success – here’s to the next ten years.”

The Leader of the Council, Cllr Roy Perry, then presented a gift made by local artist Alice Kettle to Carmel Gillies, wife of the late architect Alec Gillies who was a prominent designer of the building. Cllr Gibson then returned to present the winner of the Discovery Centre's Christmas Card Competition, Isabella Creagh (pictured below on the far left). The WDC10 cake was then cut by Isabella as the ceremony came to a close.

The Mayor and Mayoress of Winchester were then given the final tour of the building, while all the dignitaries had the chance to meet and browse the fabulous display of the building's achievements and regular services and events.

In the “Celebration of 10 Years” stop-motion footage that played behind the podium throughout, it proudly declared the 500,000 people per year that have passed through the Discovery Centre's doors in every one of those 10 successful years. We were proud to welcome some of those people back over the weekend, and acknowledge those that began the Centre's journey throughout that time. We now anticipate more successes in the next 10 years!