We know that it’s not always clear  to people in the libraries sector just what the DCMS Libraries Team does, so here’s a whistle-stop tour!

Sitting in the Arts, Heritage and Tourism directorate at the Department for Digital, Culture, Media and Sport, our team of six works full time across a range of library issues. We are all civil servants and the purpose of our team is to inform and implement DCMS policy, support our ministers and act as sponsor for the British Library.

The last couple of years have been challenging for us all.  The Libraries Team worked closely with sector organisations such as ACE, Libraries Connected, CILIP, and the Community Managed Libraries Network to support and guide libraries through national restrictions.  Through the Library Services Working Group, a subset of the Cultural Recovery Taskforce, we advised on guidance to support the libraries sector responding to the COVID-19 crisis and we channelled  information and queries to the Cabinet Office.

We made the case for libraries, meaning that even in the strictest lockdowns libraries could still provide access to essential services such as access to public computers, home and school library services.  We even ensured that library workers were classified as essential workers. 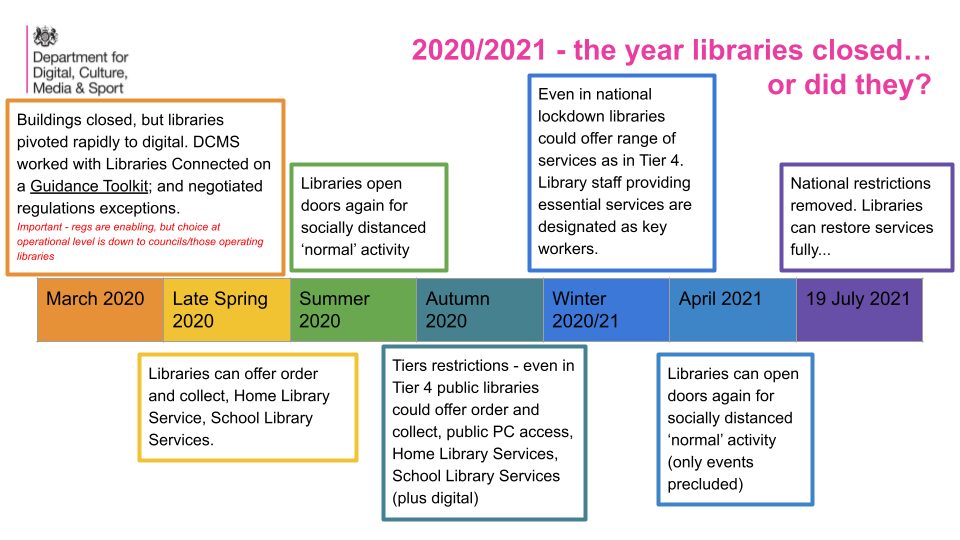 The Libraries Minister is Lord Parkinson, the Minister for Arts. We support him in a variety of ways, including preparing briefings to support visits he makes or to inform meetings he has with representatives from across the sector. For example, during Libraries Week, in his first few days as Minister, Lord Parkinson visited Manchester Central Library to hear about the range of services delivered by the library and how they benefit the local community.

We also support our ministers in dealing with Parliamentary Questions, correspondence, debates and Freedom Of Information (FoI) requests. This often requires us to work to tight timescales. For example, if we receive an Ordinary Written Question we have to respond within 48 hours. Ministers quite rightly expect swift responses to members of the public who take the time to write in.

Underpinning everything we do, is supporting our Secretary of State (Nadine Dorries MP) in her duties under the Public Libraries and Museums Act 1964. She has a duty to superintend, and promote the improvement of council library services in England. But what does that mean in practice?

This responsibility is largely delegated by the Secretary of State to the Libraries Minister, and we support them by investigating any complaints that are made about library services which people think are failing to meet their statutory duty. You can find out more about this in the guidance we published previously. We also publish the Ministerial decision letters about representations that we have investigated.

However, that is only part of our superintendence work. We’re really keen to talk to and visit library services who are at an early stage in considering changes (or are in the process of making changes) to their library service provision. This helps us understand what’s happening but also provides opportunities for councils to ask us questions. Sometimes we meet councils because they have contacted us; but other times we pick up the phone to talk to them because we’ve heard they’re planning changes, that a consultation is underway or being planned or that a new strategy has been published.

DCMS is responsible for public libraries policy. This means that we work within government to promote the value of libraries and what they deliver to decision makers. We talk to a wide range of people in different departments advocating for the strengths of libraries in supporting their agendas - whether that’s health and well-being, business support, skills, or supporting places like rural communities, high streets and towns.

Just one example: we worked with the Department for Education to promote the role of libraries on early years speech and language development. This meant that its Hungry Little Minds campaign, which aims to improve early literacy and language skills in the years before children start school was launched with input and representation from the library sector.

We also work closely with other parts of DCMS to promote the role of public libraries; for example the Loneliness team (see below) and our Online Harms Team (on the new Online Media Literacy Strategy which was launched on 14 July 2021 and recognised the key role libraries can play as information specialists).  We are also playing a part in wider DCMS work focussing on youth policy and on a growing range of place-based work.

Part of the Secretary of State’s statutory duty is to promote the improvement of the public library service provided by councils in England.  To support this, we monitor developments in library services across England and work with Arts Council England (ACE) as the national development agency for libraries.

While public libraries are core funded through the Local Government Settlement there are opportunities through fiscal events (budgets and spending reviews) to secure additional investment. Most recently this has included:

We think that in order to carry out our statutory responsibilities we need to have a sound foundation of excellent data from the sector, however we know that this continues to be a significant challenge for the sector. We have previously worked with the sector to  develop a schema for the core dataset which we’ve blogged about in the past. We intend data to be a core part of our future work plan.

You can find out more about what we (and a number of library stakeholders) do in our Annual Reports to Parliament. This is another of our responsibilities under the 1964 Act (specifically section 17).

Councils can make byelaws regulating the use of library facilities that they run under the 1964 Act. The department has to confirm each set of library byelaws before they can come into effect.  Discussions with Libraries Connected have begun about the potential for updating the existing model byelaws. We will publish some new guidance to go alongside any revised version.

Authors have a legal right to be remunerated for registered books which are borrowed from public libraries, under legislation called the Public Lending Right Act 1979. This scheme is administered for us by the British Library. We work with the British Library to run a consultation on a revised rate per loan each year, seeking ministerial approval and amending the legislation through a Statutory Instrument. You can find out more about PLR by reading our blog post on it.

For example, we help them put forward funding cases, such as that to build state-of-the-art storage at the British Library’s site in  Boston Spa  to grow and protect the national collections it holds on behalf of the nation. Or we help address particular issues such as giving the Library the freedom other sponsored museums and galleries have to borrow money. The British Library Board (Power to Borrow) Act  received Royal Accent in April last year.