The 18th meeting of the Libraries Taskforce took place in the Woolwich Centre. Woolwich Centre is notable as it appears consistently high in the lists of library usage; and Greenwich Leisure Limited (GLL) are much talked about as they now deliver services in more libraries across England than any other single organisation.

As already reported in this blog post by Kim Bromley-Derry (our Chair), before the meeting, Taskforce members had the opportunity to meet Michael Ellis, the new Libraries Minister, and ask him questions. They then had an introduction to the Royal Borough of Greenwich’s portfolio holder (Councillor Denise Scott-McDonald), and a presentation from Tim Hetherington, Greenwich’s Interim Client Manager and Diana Edmonds, GLL’s head of libraries, who talked about their overall approach, and what is happening in Woolwich Centre library in particular.

Established in 1993, GLL is the largest UK-based charitable social enterprise delivering leisure, library and community services. Under the customer facing brand Better, the organisation operates more than 250 public sport and leisure centres and over 100 libraries in partnership with 50 local councils, public agencies and sporting organisations. GLL is a staff mutual - members of GLL staff, at all levels, own the organisation through a non dividend paying share.

All surpluses made are re-invested back into the services GLL operate. No surplus can be paid to shareholders. This has resulted in millions of pounds being invested back into GLL’s facilities. Their legal structure requires them to operate centres ‘for the benefit of the community’. This structure provides a strategic fit with the aims and objectives of Greenwich Council.

The library service in Greenwich has been shown over some years to be one of the most successful in sustaining and increasing use from:

Figures supplied by GLL indicated that Greenwich’s 12 local libraries had seen the highest number of visits per 1,000 residents of any borough in the UK over the last 2 years.

Woolwich Centre library had been consistently amongst the top 5 visited libraries in the country. Total visits had increased by 108% since 2011 to 2012 and, for the last 4 years, Woolwich Centre library had exceeded 1 million visitors. Meanwhile, the number of books issued had increased by 24% overall, and the number of children’s books issued by 106%.

Discussion of GLL approaches and priorities

Following the presentations, there was discussion around a number of questions posed by members of the Taskforce. GLL talked about their approach to the use of library spaces - in particular, the importance of designing these to enable a range of different users and their needs to co-exist; and efforts made during refurbishments to vary the look and feel of each branch in a way that was sympathetic to the existing building whilst maintaining a consistent GLL branding.

They described how IT was fast becoming the main factor in supporting and upholding visitor numbers in many places, with a vital need for it to be reliable and clean, with fast connections and good print facilities. They thought this was likely to grow as online applications for jobs and Universal Credit became the norm. GLL had found that user interests varied according to local needs, but they had found ways to try things out in a flexible way, and to move various pieces of kit around to maximise usage.

There was an interesting discussion around stock, recognising that, although GLL spent less than many in-house services, it got more usage, primarily because of rigorous measurement of usage around the ratio of stock to loans, and by using data on lending patterns to inform purchasing policies.

GLL’s philosophy was that people come to libraries for an experience, and so staff were committed to engaging with users and finding the right mix of activities to appeal to local people. Most of the activities run in branches were initiated by local staff rather than being dictated from the centre (such as the very successful ‘Wellness Wednesdays’ run in Woolwich). Different branches across the Borough had markedly different user demographics, and the programmes of activities catered for these different patterns of user needs.

Finally, their emphasis on staff was illustrated by their investment in training (including supporting professional qualifications) and seeking to involve and empower staff in how the service is run.

After discussions, we broke into groups and were given a tour of the library. It was packed with visitors using computers, reading, and clustered around the touchdown points (which include power points) where several people were chatting while charging their phones.

The library is on the ground floor of the Woolwich Centre, which is a new building opened in 2012 - part of a large-scale redevelopment of the Gordon Square area in Woolwich. It is one of 2 service centres for the Royal Borough of Greenwich, where residents can access a range of council services, including housing, Council Tax, housing benefits, pupil benefits, parking permit issuing, mobility, waste services and enforcement. The library is very easy to access for people who have visited for any of those purposes, and indeed customers are often referred to use the computers in the library for form filling etc, and staff are available to support them.

After passing the Amazon lockers and touchdown spaces in the main entrance, the main body of the library is a large open space, with a concrete ceiling and masses of white shelving. A nice touch was that fiction was shelved in genre sections, and staff must have had free rein in decorating them - so, for example, a starship and tardis hovered above the science fiction section, and Marvel comic figures clambered over the graphic novels. And the non fiction shelf labels were colourful word clouds which described the contents of that section.

There are shelf end displays of books, and lots of front facing displays, so the overall impression is of colour and variety. And the children’s section continues this theme, with seats among the shelves and the usual colourful displays. Hanging from the ceiling was a giant Chinese dragon made from paper plates - apparently a foretaste of the Chinese dragon dancers who were scheduled to visit as part of Chinese new year celebrations.

There is a busy programme of activities, and sessions run by local partners. On the Wednesday we visited, in the community foyer there was a drop-in surgery run by the Metropolitan Police, an information stall about TFL Docklands Light Railway, a dementia friends workshop run by the Alzheimer’s Society, and a CV and education advice session run by the Greenwich School of Management.

Wednesdays are known as ‘Wellness Wednesdays” and, along with the foyer stalls, there was a series of activities planned, including a self esteem and happiness group, and knit and natter session. 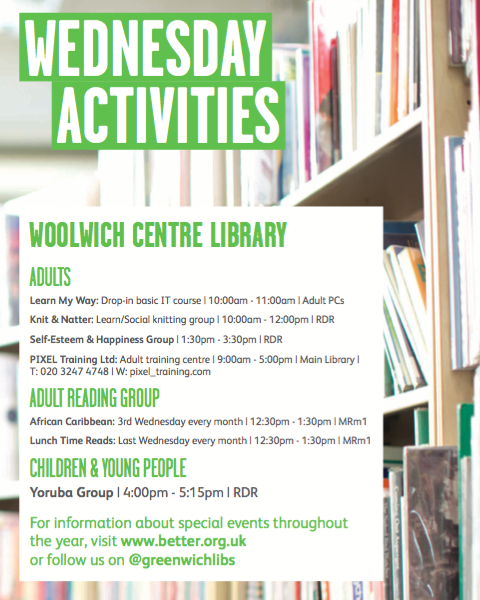 So there was lots of food for thought from the things we heard and saw. As Nick Poole tweeted after the meeting:

Interesting to see @GLL_UK identifying among the ingredients of a successful #library service, the professional #librarians, up-to-date, relevant stock and a good quality environment. These seem fundamentally important - how do we ensure every #library is able to deliver them?

Interesting to see @GLL_UK identifying among the ingredients of a successful #library service, professional #librarians, up-to-date, relevant stock and a good quality environment. These seem fundamentally important - how do we ensure every #library is able to deliver them?

Minutes of the meeting have been published on GOV.UK. The next Taskforce meeting will take place on Monday 19 March in Sheffield Central Library.